Here is a tip: If you blink repeatedly while scanning your eyes around the room, it will look like you are in a room with a strobe light. I don’t recommend doing that for the entire duration of a five-minute—or even a one-minute—dance party, but it can be amusing when done for a few seconds.

Now, there are a few things that you have to remember about the five-minute dance party. The five-minute dance party is not the dance that pro football players do when they make a touchdown; there is no gloating involved. The five-minute dance party is celebratory but not “in your face.” It is a positive, uplifting thing. Think of it as a spontaneous carefree interlude in the middle of an otherwise ordinary day.
You can have a five-minute dance party with friends or you can do it alone. I typically prefer to do it by myself, ‘cause I’m antisocial like that. But if I’m with someone that I’m really comfortable around—and I have to be really comfortable around you if I’m willing to let you see me “dance”—then there’s nothing that I love more than to share some merriment with a person who’s dear to me.
The five-minute dance party does not require music, but you can put on some tasty tracks if you like. Only n00bs (and perhaps also insecure preteens) think you have to have music on to dance. If you are of that mindset, it’s okay: there’s hope for you yet. My favorite music to dance to is Owl City because it’s peppy, optimistic, fantastical, dreamy, and has awesome beats and groove-alicious techno synth lines. (Here is another tip: don’t say “groove-alicious.” It sounds ridiculous. See?) Another bonus is that it’s often going through my head even when it’s not blasting out of any speakers around me, so I have, in essence, turned my mind into a portable dance-party-machine. Clever, huh? Anyway, you choose what music you like. If you want to include music. Again, you don’t have to.
Other accessories: You really don’t need anything else—just you, your buddies if you choose, and a playful attitude. One thing you should never bring along is self-consciousness. Leave it at home, or at least in your pre-dance-party mindset. It doesn't belong at the five-minute dance party. Like a sloth on tranquilizers, it will only hold you back and take away from the vivacious atmosphere. Take my word for it.
Now, if you’re like me, you like things that are bright and multicolored and happy and wow. However, there are some things that sometimes appear at other types of parties that are not appropriate here. For one, confetti. I love confetti. I prefer making it myself out of construction paper than using the sequins that you can get at craft stores for seemingly every occasion under the sun. But I digress. Confetti is not appropriate for the five-minute dance party because it results in an aftermath of work instead of an aftermath of laughter and gaiety over how much fun you just had. If you throw confetti at a five-minute dance party, you will most assuredly spend more than five minutes cleaning it up. So don’t do it. “But what if I cut up rather large pieces of confetti?” you might ask. “Those will be a lot easier to clean up, won’t they?” No. Don’t do it. Take it from someone who knows. Besides, one of the nifty things about the five-minute dance party is that you can have it almost anywhere, but you don’t want to make a mess just anywhere, even if it is bright and colorful and even if you are going to clean it up.
If confetti is not recommended for the five-minute dance party, then glitter is a MAJOR NO-NO. As much as I love that Pink lyric, there is almost no place where it is appropriate to throw glitter in the air. Because glitter in the air eventually falls to the ground, and then it is a nightmare to clean up. Don’t even try to outwit it: glitter-resistance is futile. Other people who are much funnier than I am have commented on this, so I will direct you to them instead of trying to elaborate further.
To recap: 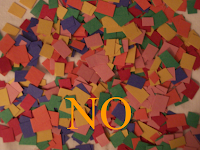 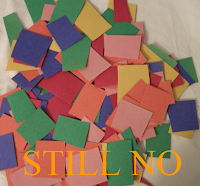 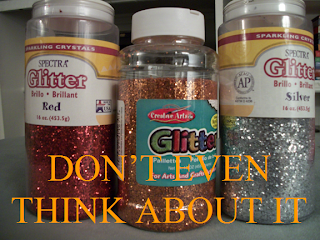 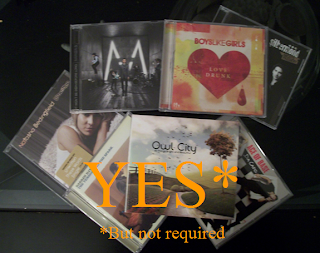 Another thing to consider is the “where.” As I mentioned, you can have a five-minute dance party almost anywhere. Don’t forget the “almost.” Here are some situations where it is not appropriate to break out into a five-minute dance party: office meetings (this only happens in commercials), during class, while a minister is giving a sermon, official ceremonies (graduations, etc.—although the end of a graduation ceremony is a great time for a dance party).
Don’t think, however, that just because you’re in a place where you need to be quiet, you can’t have a mini dance party. My friend Sarah would often post pictures and statuses on Facebook about five-minute dance parties that she and her friends would have in their university’s library. And what’s more in need of a dance-party break than a long study session in the library? Just keep it down. (This would be a no-music dance-party place.) You can let loose all you want in a place like a library as long as you don’t disturb the other patrons or make a mess. Use your own discretion.
The last thing to discuss is the “why.” That’s one of the great things about five-minute dance parties. Like the characters in a musical, you don’t need some extravagant reason to take a break from whatever it is that you’re doing and dance out for a few minutes. Just found out that you don’t have to work weekends this month? Dance party. The book you’ve been dying to get your hands on is finally back in stock? Dance party. You went outside and were just overwhelmed by the beauty of the landscape that lay before you? Dance party! Guy that you really like just asked you to dinner? Girl that you asked out said “yes”? Those are some of the best reasons for a five-minute dance party. (And for those last two, feel free to extend the giddy happy dance beyond five minutes.) Or maybe you just need a break from the tedium of a mundane workday. Close your eyes, think of an awesome adventure you had recently, and dance party away, my friend. However, depending on your work environment, you might want to close the office door first.
Posted by Olivia Faix at 11:45 PM